’22 Hurricane Upon Us: Have a Plan

Living at the shore comes at a price. Wise lifelong residents know this. Natural forces of wind and water have been shaping our coast for millions of years. That’s life at the beach.

Even as we face the 2022 hurricane season (from June 1 to November 30), shore residents already have enough worries. Efforts to eliminate beach replenishment funding, growing federal and state government insolvency, and over-development of the coast means we beach folks already face serious challenges to our permanence.

Satellite image of Sandy over the Northeast.

For 2022, the NOAA’s Climate Prediction Center is forecasting 14 to 17 named storms, 6 to 8 hurricanes, and 3 to 6 major hurricanes — meaning a 65% chance of an above-normal storm season for the Atlantic basin. A major hurricane is one that is Category 3 or stronger on the Saffir-Simpson Hurricane Wind Scale. Cat 3 hurricane winds can reach 130 mph with storm water surges up to 12 feet above the mean high tide.

This is the price beach bums must pay. And we paid big time not too long ago — with “Superstorm Sandy” in late-October 2012. Whatever you want to call it, a hurricane, a superstorm or a “post-tropical cyclone,” Monmouth Beach had a taste of “the big one” within recent memory. It made a meal out of the borough and surrounding coastal towns.

While driving through the borough shortly after that storm, I’ll never forget the signs of its impact — not so much to property and possessions — but in seeing the mounds of ruined home contents lying on the side of the road for junk removal. For months the MB Bathing Pavilion parking lot looked like a mountainous garbage dump. I thought about Monmouth Beach people and property — forever altered by this direct hit from nature. And yet they endured.

Beyond Sandy, history finds only one intense hurricane made landfall in New Jersey in the past 350 years in 1821 (others recall bad ones in 1938 and 1910). Although the chances generally favor us (most hurricanes lose their energy before reaching the Jersey Shore), any appreciation for the law of averages means understanding that the longest odds will sometimes hit, more than once.

Monmouth Beach alone, according to the Monmouth County Board of Taxation, has a total assessed real property value of about $1.3 billion. The borough — mostly a low-lying barrier beach bracketed by the Shrewsbury River and Atlantic Ocean — is particularly vulnerable. Geologically known as the Northern Headlands, our immediate shore area is “characterized by narrow beaches at the base of deteriorated bluffs and dunes that have been eroded by years of storm damage,” say the experts at Hurricaneville, “offering the least suitable natural and artificial protection from erosive forces.” 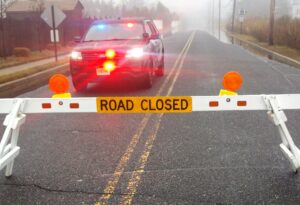 What’s the Plan?
Shore residents shouldn’t count on government of any type to save them. Security only comes from having an escape plan and the discipline to employ it when the time arrives. If we’ve learned anything, it’s that weather is unpredictable.

Even the most advanced climate-tracking technology is no match for Mother Nature’s wrath. Late changes in a storm’s path could leave thousands unprepared. Bottom line: all shore dwellers must be vigilant and always have a “Plan.” Here are some other basics to consider:

• Shore residents should always be a little more alert and prepared during the hurricane season.

• If you suspect serious weather trouble, listen to the Weather Channel. Tune into the borough’s radio station at 1640 AM for regular weather updates. The MB Office of Emergency Management also has a Facebook page.

• Have a personal escape route planned and a safe location predetermined. The borough has posted Coastal Evacuation Route signs throughout town. Know them and have your gas tank full.

• Assemble and maintain a disaster supplies kit. This should include a flashlight, radio, batteries, first aid kit, nonperishable foods, three gallons of water per person, and protective clothing.