When my father was in his late 40s he ran for a seat on the Monmouth Beach School Board of Education (as if he didn’t already have enough to do, being a busy physician, husband and father of 8 children). He lost, badly. But I give him credit for trying.

Hurting his chances in 1966, aside from the fact that many thought him an “out-of-touch-doctor,” was that he strongly advocated “college” for all children in our small seaside community. Back then the annual school budget was only about $160,000. Turn out for that board election was about 60% of registered voters; Dad got just 163 votes. 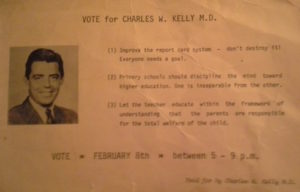 One of his chief campaign planks was: “Primary schools should discipline the mind toward higher education. One is inseparable from the other.” Dad strongly believed that a college education was key to securing a satisfying and successful future.

Another theme he ran on was academic accountability: “Improve the report card system — don’t destroy it. Everyone needs a goal.” Then school principal Don Stevens had proposed eliminating report cards.

Clearly, dad was a troublemaker. Back in the 1960s, my mom chalked up the loss to some “clam-diggers” who didn’t agree with his goals. But I’m not sure that dad was such great a candidate. Doctors orders and all.

For me, there’s no question that college was worthwhile. It was at a then little old school in West Long Branch, Monmouth College, that I found out who I was, what I was good at, and how to make friends. The experience really helped to form me as a person. I see this wonderful evolution in both of my children who have used their college education to obtain very good jobs. I’m so proud of them.

“Education is not preparation for life; education is life itself.”
—John Dewey

And getting a college degree is still a fairly unique accomplishment, according to the National Center for Education Statistics, only about 1 in 3 Americans have one.

A recent poll by New America was mixed: While 75% think it’s easier to be successful with a college degree, only 25% think our higher education system is functioning well now.  And about 50% believe there are many well-paying jobs that don’t require college attendance.

Beyond just the enormous expense (according to the College Board, the average annual cost of public college is near $25,000; at a private college it’s about $50,000), one can certainly wonder and worry about the direction and culture on many of today’s college campuses. Even still, the learning journey is worthwhile.

A wise person once told me that you really only remember one thing on the day you earn your college degree — the reaction on your parent’s face. In all my years spent with Dr. Charles W. Kelly, I never remember a happier face than his on the day I became a college graduate in May 1983.