Take Me Out to the Ballgame

It was in October 1969 at the Monmouth Beach School when I first fell in love with the New York Mets.

My fourth-grade teacher was a Met fan and I had elected to stay after school with a few other kids and listen on radio as the “Amazing Mets” closed out the Baltimore Orioles to win the 1969 World Series. 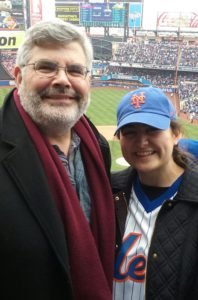 Father and daughter at Met game.

It all began in the borough’s stately old school building on Griffin Street. The memory is indelible.

And ever since then I’ve been hooked. All true Met fans know of that season, now nearly 50 years ago, as the team’s hallmark year. From that team the names Jones, Koosman, Agee, Swoboda, Weis, and Clendenon — while little known to most baseball fans then and now — would become immortal players for Met supporters.

I’ve been talking to my kids about that Mets season and many other things Mets ever since they were little. They got hooked too. The game brings us together.

My daughter Lauren is a Met fan — a very serious fan. She keeps up with almost all the games and got me back into watching regularly. I’ll admit that my support for the Mets through years has been tested (I still can’t get over the 1977 Tom Seaver trade), but I also know that Lauren has made me a believer again.

My son, Kyle, is also a Mets backer. Both of them have a love and respect for the history and traditions of the game as well. They remember seasons, teams, players, games, and events. Me too. So the game presents a superb opportunity for us to make a connection.

I’ll never forget one game we attended a few years ago. Upon reaching the stadium and walking around it and in it, my kids really shined. Looking at some historic Met images at Citi Field, the kids surprised me with their recall for great (and not so great) Met moments and players. I was in “family” and “baseball” heaven.

Just recently I got the opportunity to do more grand baseball bonding when Lauren and I attended Opening Day of the Mets 2018 season on March 29. Thanks to a lot of pushing from my very determined daughter (I got too many texts to count), it’s the second year in row we’ve made Opening Day. And knowing Lauren’s resolve, I’m sure there will be many more.

“There are only two seasons: Winter and Baseball.”
—Bill Veeck

The seats behind the third base line offered an excellent view — high enough to get the big picture yet close enough to see the action. Before a full house, the Mets won (9-4 over the St. Louis Cardinals). It was a perfect afternoon with my daughter and we’re 2-0 on Opening Day.

Getting the time and attention of my children nowadays is no small task. They’re getting older (my son, Kyle, turned 24 last month and my daughter, Lauren, was 22 in November), so they have their work, their schooling, their friends, and their interests to pursue. Baseball allows me to seize the moment.

I highly recommend a family trip to Citi Field for a baseball game. It’s so much better then the old Shea Stadium — more open and inviting with a wide selection of food and drink to choose from. Bring money though, a beer costs $14.