Long Branch: Keys to the City

Plus, the “Mayors of Long Branch” — 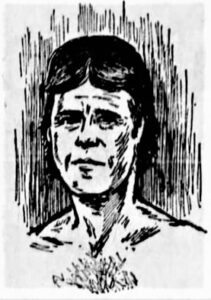 According to local folklore, five associates of the original Monmouth Patent holders in 1665 (John Slocum, Eliakim Wardell, Jasper and Peter Parker and George Hulett) came to Monmouth County (then the British colony of New Jersey) to find suitable land and more religious freedom. At that time the men were trying to resolve a land acquisition dispute with Native American locals.

Starting at dawn at a spot near today’s North Lower Broadway in Long Branch, Slocum engaged in a “two falls out of three falls” wrestling match with Lenape tribe member Vow-a-Vapon. Under the terms, if Slocum won he could buy all the land that he could “walk off” in one day. If he lost his group left with nothing.

Slocum won a tough match — defeating an opponent who was “greased from head to foot.” The agreed upon payment for the land was “20 shillings per acre.” The Slocum take ended up being about 375 acres of land.

Most shared the reward of Slocum’s struggle. He got Long Branch, the Parker’s took Rumson/Little Silver, Wardell received Monmouth Beach/Sea Bright, and Hulett disappeared. The Slocum family would hold much of the land for some 200 years, according to a 1904 Long Branch Daily Record account.

In 1683, Slocum was appointed a captain in the colonial militia and later was made a County Ranger. He is also responsible for first developing an old Indian trail (today’s Broadway). Born in Portsmouth, RI in March 1645; he died in February 1702. Slocum Place in the city is named for the family; they also ran the city newspaper for over 25 years.

Myth or fact, the Slocum account has added weight to it — being cited in the 1940 Long Branch city-bio book, Entertaining a Nation. Plus, the Daily Record — “the people’s paper” in Long Branch — repeats the tale in its July 1951 “Golden Anniversary Edition.”

The first recorded mention of the name Long Branch came in a March 1682 land survey for Abijah Edwards, according to a Long Branch Daily Record story in August 1963, when it was then part of Shrewsbury Twp. In February 1849, Long Branch separated from Shrewsbury Twp. becoming part of Ocean Twp and governed by a three-member township committee.

In April 1867, Long Branch left Ocean Twp. and incorporated as an independent borough — governed by the “Long Branch Police, Sanitary and Improvement Commission.” That was changed to just “Long Branch Commission” in 1904.  The first commissioners were: Francis Corlies, Louis B. Brown, Samuel Laird, Jacob Herbert, and Cornelius Van Derveer. Corlies was the first board of commissioners president (or ‘”mayor”) and John Lanning was the first town lawyer. With some adjustments, this five-member city commission set-up would run things in Long Branch for nearly 50 years.

A new century and city population reaching 10,000 brought more government change. In May 1904, Long Branch voters strongly supported (948-256) incorporating as a city (under the Coult Charter Act). The first mayor under this charter making Long Branch a city was C. Asa Francis. He was inaugurated amidst a celebratory parade and ball, with the state’s governor in attendance. The city’s first election was in November 1904 and Republicans won big — capturing the mayor’s seat and a clear majority on the seven-member city council. Just under 3,000 voters went to the polls.

As part of its efforts to incorporate as an independent city in early 1904, Long Branch had sought to annex Deal, Loch Arbour, Allenhurst, Eatontown and Monmouth Beach. NJ state legislators in Trenton rejected these plans but did throw in the Pleasure Bay, Branchport and North End sections.

From 1912 to 1954, Long Branch commissioners were paid $2,000/year; the mayor got $2,500/year. According to a May 1954 Long Branch Daily Record story celebrating the 50th anniversary of the city, the Long Branch Board of Trade (businesses) and the Long Branch Property Holders Association (homeowners) also deserve congratulations “for launching the movement to win a new government for Long Branch.”

In May 1960, a Charter Commission recommended that Long Branch change to a new “council-manager” form of government. A nine-member city council (after selecting the mayor from its ranks) hires a city administrator to manage city affairs. That November, 60% of city voters agreed to the change. In May 1961,  Lucy Wilson became the first women elected to a city governing body. The first city manager was Richard J. Bowen; paid $13,000, he lasted about 18 months.

More civic change came in February 1966, when voters backed by nearly 3-to-1 the Mayor-Council (Plan A) form of municipal government under the Faulkner Act. In May 1966, for the first time a mayor was popularly elected — with 68% of registered voters casting ballots. Sworn-in July 1966, the first mayor was, Paul Nastasio, and the first city council members were: Henry Cioffi, Samuel Teicher, Elliot Katz, Robert Cornell, and A.V. Ippolito.

Today’s city government operates with a mayor and five-member City Council, whose members are elected at-large in nonpartisan elections to serve four-year terms of office on a concurrent basis.

The wrestling match for “Greater Long Branch” between John Slocum and Vow-a-Vapon, 1668. 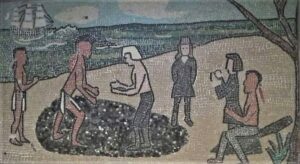 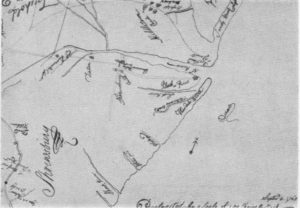 Broadway Turnpike tollbooth, Long Branch Daily Record, August 1961. By the mid-1830s, Long Branch was largely divided into two sections: Upper Village and Lower Village. To pass from one section to another along Broadway required paying a 2 -cent fare. After much citizen protest, the booths were removed in 1875 when the LB Commission bought the road’s charter. 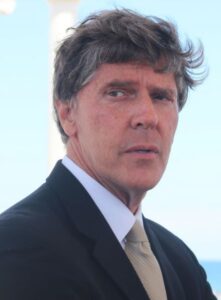 Note: From 1867 to 1904, the “mayor” was actually “president” of the Long Branch Commission. All were Democrats except Heisley, Chandler, and Reed.

His name is neither honored or recorded in city history. But Francis Corlies was the first “mayor” (or rather the first president of the Long Branch Commission). The “record” shows he was appointed in April 1867 and served until 1870.

Corlies was deep in the makings of the Long Branch & Sea Shore Railroad company — a than magical mode of transportation to easily shuttle the rich and famous from NYC to the Jersey Shore via ferry and train. In March 1864, Corlies was part of a committee that negotiated a land deal with President Abraham Lincoln to build a railroad starting on government property at Spermaceti Cove on Sandy Hook to Long Branch and on down to Manasquan. To ensure completion of the line from Sandy Hook to Long Branch by July 1865, Corlies was put in charge.

Later on as a shore area NJ state assemblyman for three terms, he was “instrumental in the initial movement for a government in Long Branch,” according to a Long Branch Daily Record story in May 1954.

He also helped organize the city’s first bank, the Long Branch Banking Company on Broadway in March 1872 and sat on the first Monmouth Park Racetrack board of directors in 1869. Born in Shrewsbury Twp., he was the son of Benjamin W. Corlies, one of Monmouth County’s top surveyors in his day. Francis died in April 1897 at age 70.

Most often, credit for being the first Long Branch leader goes to Joseph H. Cooper, a popular hotel owner, who served as commission president/mayor for nearly the entire decade of the 1870s — true boom times for the “Summer Capitol.” He owned the Metropolitan Hotel and grew it into a popular spot. Cooper Avenue in town is named for him. Both Cooper and Corlies were Democrats. 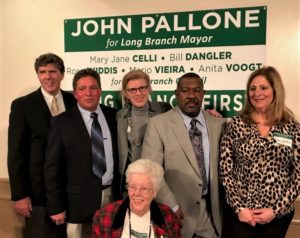 Long Branch: “The Friendly City” The motto came from a 1967 awareness campaign for a change in city government. Long Branch has been called “The Friendly Shopping City” as far back as 1950. 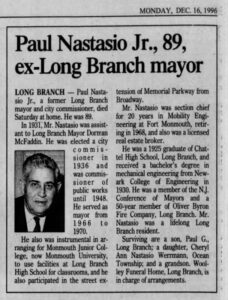 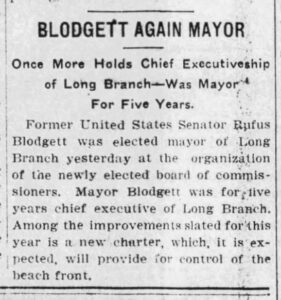 He was a United States Senator for NJ — in between terms as Long Branch mayor, December 1903. A Democrat, he died in October 1910 at age 76. 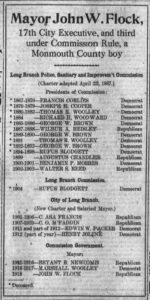 Some leadership history, according to the Long Branch Daily Record. January 1918.

Charles Asa Francis had a sterling resume: Starting out as a Long Branch commissioner in 1884, he also served as mayor (1905-1906), board of education member for over 25 years and postmaster. He was an elected member of the NJ State Assembly and NJ State Senate (and its president in 1902). In 1905 he was elected Monmouth County Sheriff and appointed the Monmouth County Treasurer in 1909. He was partners in a successful North Long Branch grocery store, Hoyt & Francis. Born in Howell Twp. in 1855, he moved to Long Branch in 1873. He died in April 1934. 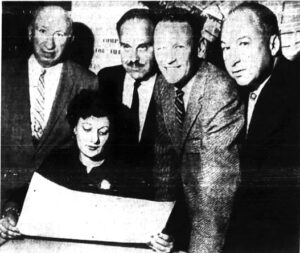 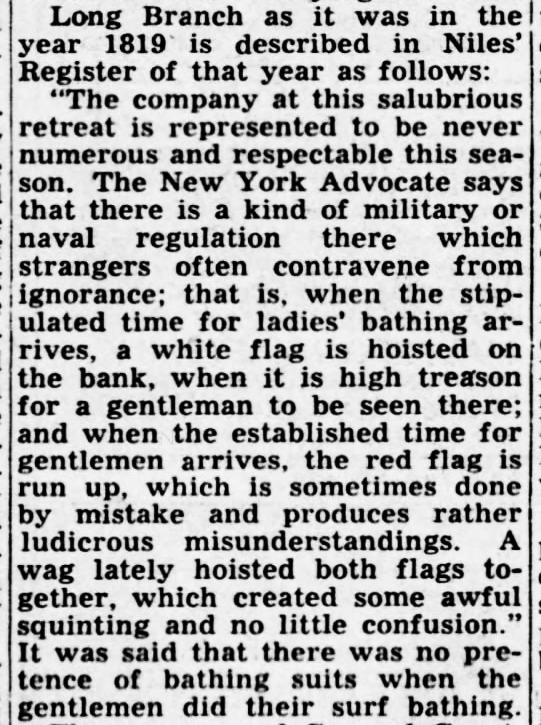 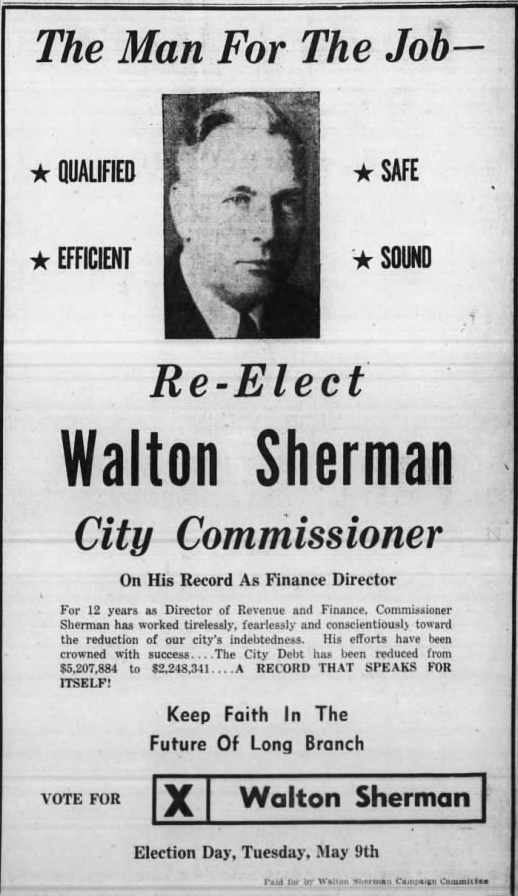 Walton Sherman political ad, Long Branch Daily Record, May 1944. When he retired after 20 years as a city commission member in 1952, Sherman was the longest serving commissioner in Long Branch history. A LBHS grad, he was treasurer of family coal company and chairman of the Long Branch Banking Company. After he left the city he served on the Monmouth County Board of Freeholders until his death in October 1964. 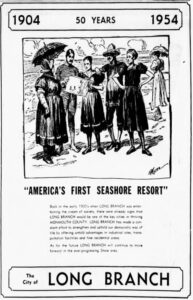 City of Long Branch — 50 Years Incorporated. APP Ad, November 1954. The city would celebrate its “Charter Day” that May with a Broadway parade, beauty contest and Golden Jubilee Show (hosted by Dave Garroway of NBC’s Today).