A Lesson in Friendship

In today’s trouble times it’s uplifting to reflect on how two different men found a friendship. 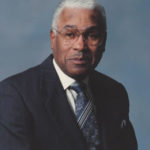 In following my dad’s medical career, I learned that one way doctors gain fresh perspective and positive re-enforcement is through enduring friendships with their medical colleagues. My physician-dad proved a good example here. Although you’d never know it from his mostly dispassionate style, dad had plenty of doctor-friends. They worked together, traveled together, and discussed medicine and life together.

Among dad’s many friends was James W. Parker, Jr., MD — a prominent and pioneering African-American physician who practiced in Red Bank, NJ. Ever-dedicated to his work of healing the less fortunate; even illness couldn’t bring Dr. Parker to entirely close his West Side office and he only stopped talking patient calls two weeks before his death in November 2004.

Born two months apart in 1918-1919, my dad and Dr. Parker both joined the staff of Riverview Hospital in 1955.  “Jim Parker was a very accomplished doctor, who cared for his patients and his community more than any person I ever knew,” dad told me “He had a busy practice because he cared for the less-well-off but also because he knew what he was doing.”

“Words are easy, like the wind; Faithful friends are hard to find.”
—William Shakespeare

The two doctors shared a mutual respect and admiration. As a teenager, I’ll never forget one winter morning when I drove my father to meet Dr. Parker. Dad had been invited by Dr. Parker to join him and his friends at his Florida vacation home for a week of R&R. My father — a man who judged people by actions never appearances — was the only white person to be included in Dr. Parker’s large entourage of travelers. “I was very much honored to be included,” my Dad explained, “and we had a great time.” Even as a young man I saw the harmony.

The son of a physician and grandson of slaves, Dr. Parker was revered in the community of Red Bank for his humanity. A man of large stature — physically and intellectually — Dr. Parker was a founder and member of scores of local service organizations and boards. A lifelong resident of Red Bank, in tribute to his devotion, a borough street and health clinic are named in his honor. Opened in 2000, the Parker Family Health Center at 211 Shrewsbury Avenue in Red Bank is a free healthcare facility for Monmouth County residents who don’t have health insurance or the ability to pay.

Known for providing care beyond the physical, Dr. Parker — a Howard University College of Medicine graduate — was a big believer in education. “Jim knew the power and worth of an education and he always promoted it as an important means to a fulfilling life,” dad once told me.

Note: During the course of my journalism career I wrote thousands of stories and columns, many about my physician-father. As far as I know, the above story is the only one dad ever cut out of the magazine and saved. As it turns out Dr. Parker’ wife, Shirley, also got hold of the story too and pledged to me in a letter to “keep it forever.”