A President of the United States of America did visit Monmouth Beach or what it was to become (the area was officially part of Ocean Twp. from 1849 to 1906). 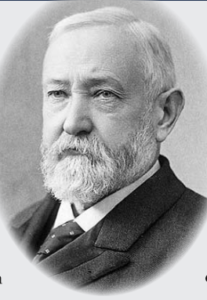 According to a June 1924 Long Branch Daily Record report, Benjamin Harrison, America’s 23rd President, was a regular guest here in the mid-1890s when the location was an exclusive coastal resort community run by the Monmouth Beach Association. Another article in the Red Bank Register from January 1, 1930 states the president spent “summers” in town. According to an October 1894 Shore Press report, ex-President Harrison and his daughter, Mary Scott McKee, and grandchildren had just summered in a “Monmouth Beach cottage.”

So by some indications an early “Summer White House” may well have been the Monmouth Beach Clubhouse Hotel on Beach Road. President Harrison, who served in the White House from 1889 to 1893, also owned a 10,000 square-foot custom-built mansion in Indianapolis at the time. Today it’s his presidential museum. He prevailed in the 1888 election by winning the Electoral College but losing the popular vote (sound familiar?)

Harrison already had considerable prestige before his presidency. He had been a Civil War general, US Senator, and prosperous Indiana lawyer. And he holds several distinctions as president. He was the only one to serve between the two terms of another president (those of Grover Cleveland); his grandfather was William Henry Harrison (the nation’s ninth president); his great-grandfather (also Benjamin Harrison) signed the Declaration of Independence; he opened Ellis Island and was an early advocate for voting rights; his wife died while he was campaigning for re-election (he lost by 3% out of 12 million votes cast); he was the last president to wear a beard (five of the previous seven had them); and the first to have electricity in the White House. He died in March 1901 at age 67.

According to a July 1897 New York Times report, President William McKinley was scheduled to stay at the clubhouse hotel that summer as a guest of the Houghtons, the owners. I couldn’t confirm he made the visit. According to a July 1902 Waterbury Evening Post story, President Teddy Roosevelt passed through Monmouth Beach by train where a crowd at the station cheered him and waved flags. With the president  was his wife Alice, NJ Governor Franklin Murphy, and US Senator John Kean — all on the way to see the national guard encampment at Sea Girt.

“Great lives never go out; they go on.”
—Benjamin Harrison

When it comes to presidential visits to New Jersey, our neighbor to the south, the city of Long Branch, played the big time — hosting seven U.S. presidents, including the Republican Harrison.

Beginning in 1867, soon-to-be-elected President Ulysses S. Grant visited Long Branch and fell in love with the area. He would return every summer during his eight years (1869-1877) as the nation’s chief executive. He owned a home in Long Branch and may even have visited the Monmouth Beach area. According to Entertaining a Nation, the hero general loved to get around. He was known to “wildly” race his horse & buggy up and down the beach.

According to a Sept. 1916 Washington Herald report, Vice  President Thomas Marshall and his wife stayed in Monmouth Beach for a weekend prior to joining President Woodrow Wilson at Shadow Lawn.

Local News and the President … 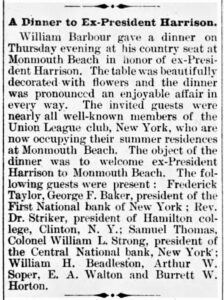 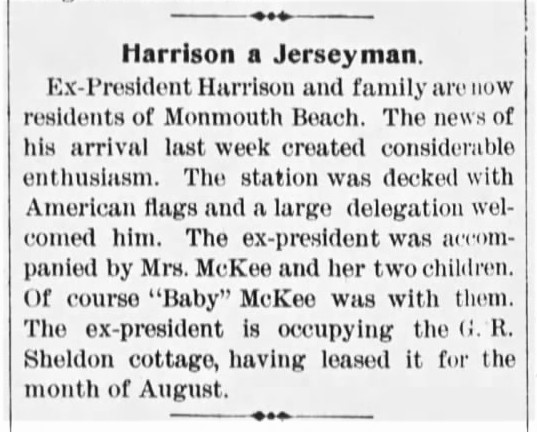 A former US President — resident of Monmouth Beach, APP August 1894.